John Hughes: A Life in Film by Kirk Honeycutt

John Hughes: A Life in Film by Kirk Honeycutt 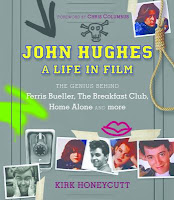 John Hughes: A Life in Film by Kirk Honeycutt
Reviewed by Laura the Librarian
It is hard for me to believe that “The Breakfast Club” celebrated its 30th anniversary this year. It is one of the seminal teen films of the 80s that launched the careers of a few Brat Packers as well as a brash, young filmmaker named John Hughes. Honeycutt offers a behind-the-scenes look at the rise and eventual withdrawal from the spotlight for Hughes. The illustrated book features great pictures and plenty of first-hand accounts from people who worked with Hughes. This is a warts-and-all look at the talented filmmaker who could be gracious and collaborative one minute and quite mercurial the next. There is plenty of dish about the stars of the movies and what happened on set. John Cusack instead of Judd Nelson as John Bender in “The Breakfast Club?” Jennifer Beals instead of Molly Ringwald as Andie Walsh in “Pretty in Pink?” Hard to imagine. The book also details Hughes start at “National Lampoon,” his close friendship with star John Candy and his retreat from Hollywood. This book is a fun trip down memory lane, particularly since we still see Hughes’ far-reaching influence today from “The Breakfast Club” as a plot point in “Pitch Perfect” to the reboot of “National Lampoon’s Vacation” with Ed Helms. Yep, the original was penned by Hughes. After you read this book, you will want to re-watch many of his films or catch them for the first time. Head to our catalog to start watching.
By SCLSNJ Staff|2017-05-03T20:18:51-04:00July 1st, 2015|SCLSNJ Recommended Reads|